The Shadow/Highlight Tool in Photoshop CS: Breathing New Life Into Your Images 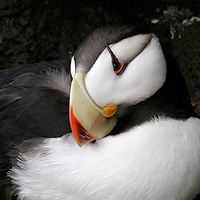 Fortunately for most, the Photoshop 8 CS Shadow/Highlight (S/H) tool doesn’t have a confusing name, so it’s pretty easy to understand its purpose. Simply put, the tool allows more precise control over the dark (shadow) and light (highlight) areas of your images.

It’s all the rage with some photographers; many make claims of saving otherwise useless images or even that the image-editing feature can replace fill flash! While I feel it’s rare to be able to make a great image out of a poor capture, I agree that informed use of this new tool may be able to resurrect some of those saved images taken long ago that maybe you shouldn’t have kept due to high contrast or poor exposure or lighting conditions. 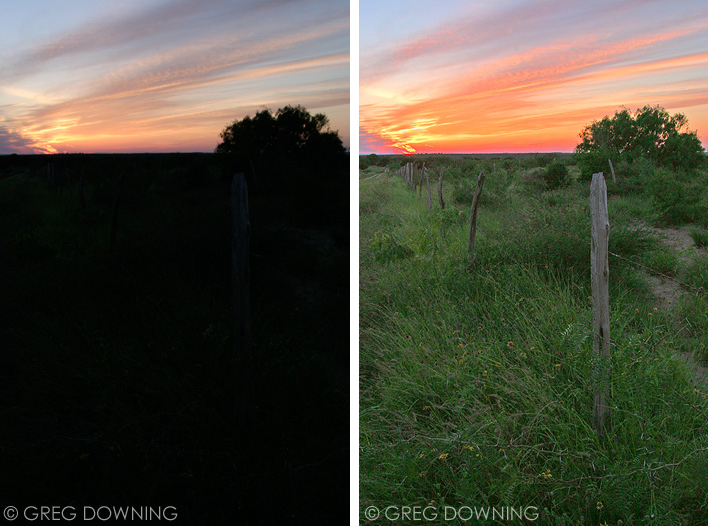 The above image was a quick handheld grab shot taken handheld without use of any filters. The left image is straight out of the camera; the right image has had S/H adjustments only. The S/H tool brought out the foreground while controlling (and even darkening to some degree) the sky. (A better option would have been to capture two different exposures in the field on a tripod, then combine in Photoshop. One would be exposed for the sky, the other for the foreground.) In this example, I simply exposed for only the sky, knowing the foreground would be grossly underexposed and would need to be brightened up significantly. While an expert might be able to achieve similar results with the use of curves and masks, the Shadow/Highlight tool saves a ton of time and is easy to master when you understand the controls.

Unfortunately, use of this tool without a fundamental understanding of each setting can cause unwanted effects in your images that may go unnoticed upon initial inspection. Common to improper use are halos and color shifts. 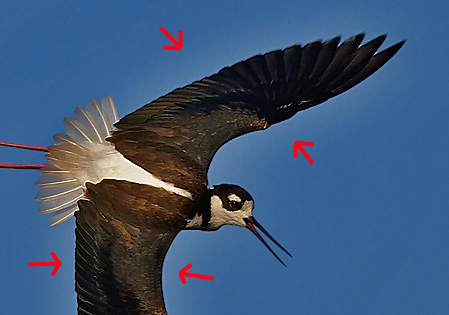 The halo created by improper use of the Shadow/Highlight tool is different from the halo that users of Unsharpen Mask are familiar with. In this example (left), the halo is a subtle lightening in a wide band around the subject. The halo rim is indicated by the arrows. Colors shifts and blurring are also a possibility with improper application of the Shadow/Highlight tool. Review your final results carefully, perhaps even compare the processed image to a static example as a guide for proper coloring.

When to use the Shadow/Highlight tool

This feature is useful in obtaining detail on severely underexposed subjects with strong backlighting or in correcting slightly over-flashed or overexposed subjects. It is also useful for brightening up shadows or toning down highlight areas in an otherwise well-lit, well-exposed image. High contrast images with distracting shadows can be toned down surprisingly well. Images where fill flash or neutral density filters were not an option upon capture can also be greatly improved. Shadows and highlights can be adjusted independently; in fact, one need not be adjusted at all in order to apply the other.

How to use it

The Shadow/Highlight tool is accessed via the Image menu (IMAGE>ADJUSTMENTS>SHADOW/HIGHLIGHT). When you open the tool for the first time you will be presented with default settings and your image will, in most cases, change dramatically as the”preview” button is checked for a real-time preview that applies the current settings.

As with most Photoshop tools, the default settings are only appropriate for a few images so it’s important to know how to make the proper adjustments for each image to obtain optimal results.

Be sure to check the “Show more options” button to reveal other settings. It is in these advanced settings where absolute control lies. Under each of the two Amount sliders there are two options, “Tonal Width” and “Radius.”

The “Radius” slider adjusts the local neighborhood of pixels to be affected by the adjustments. This is different from Tonal Width in that it determines by relative location rather than luminosity value (or brightness/darkness).

When adjusting images of my own I find it best to follow these steps:

I open the image in 16-bit mode at full size before any interpolation or resizing. Starting with Levels, I adjust the image carefully while keeping in mind that there will be additional adjustments to the darkest and/or lightest areas. 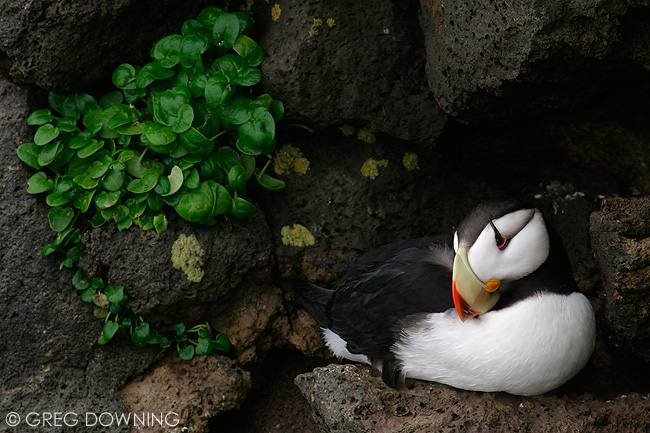 Open the Shadow/Highlight tool (IMAGE>ADJUSTMENTS>SHADOW/HIGHLIGHT) Check (or verify) the “Show more options” button and place zeros in both Amount sliders as well as in both the Tonal Width sliders.

Check (or verify) both Radius amounts so they are set to roughly 50-100 pixels. This radius will vary depending upon the image size and should be adjusted for each image, but this is a good place to start for a six to eight megapixel image requiring moderate adjustments. If, at any time during the image adjustment, you notice a blurring effect or a loss of detail, this is an indication that the radius is set incorrectly. You can select to “Save as defaults” so you only need to enter your settings once.

Start with either the shadows or highlights Amount slider depending on the majority of adjustment needed in the particular image. For this example I will start with the shadows.

Slide the Shadow Amount slider slowly to the right and note any changes in your image (be sure to have the “preview” option checked). Since the Tonal Width slider is at “0″ (or all the way to the left), at this point you should notice that only the deepest of shadows are affected. With images devoid of deep shadows, there may be little or no effect. Adjust the slider so the dark shadows in your image begin to look satisfactory. If you are unsure where to stop, or you see no changes, then start at an amount of 50% and adjust from there.

Slowly adjust the Tonal Width slider to the right and note the additional areas that are now affected. As you increase the adjustment be watchful of change in the areas that you don’t want affected, such as the mid-tones. Image contrast can be lost this way. Once you begin to see the effect you can then fine-tune each with the Amount and Tonal Width sliders, using them together to achieve the desired results.

If you have a simple image with a subject and a clean, pleasing, middle-toned background, as in the example, it is best to not be tempted to adjust the Tonal Width slider high enough to lighten (or darken) the background as this can cause halos around the subject. While these halos can generally be reduced with the Radius slider, it is often at the expense of a loss of detail in the subject. If you want the background lighter or darker, do it using a levels or curves adjustment before using the Shadow/Highlight tool. For many images, the most shadow detail is extracted by teetering the Tonal Width adjustment right up to the edge of where it begins to have an effect on the background, but this is still highly variable from image to image! The same effect can often be seen if you allow the adjustment to affect the sky in some landscape images.

When finished with the Amount and Tonal Width adjustments you should do some final tweaking of the radius, ensuring you get the most detail out of the image. Simply slide the radius one way or the other from your starting point and review the finer details in the photo. Experimentation with this slider is almost always necessary as images vary. Again, if at any time during the radius adjustment you notice a blurring effect and loss of detail this is an indication that the radius is set too low. 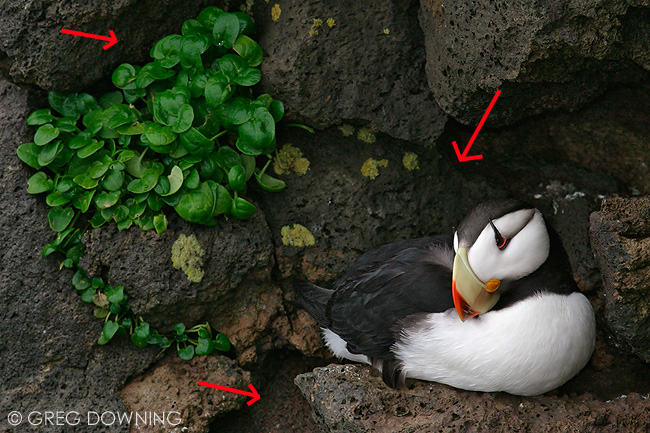 Sample image with only shadows adjusted; arrows indicate the areas affected most.

Once you are satisfied with the shadows adjustments, move on to the highlights adjustments repeating the same steps using the Amount, Tonal Width and Radius sliders.

Slide the Highlight Amount slider slowly to the right and note any changes in your image. Since the Tonal width slider is at “0″ (or all the way to the left), at this point you will note that only the brightest of highlights are affected, and with some images that do not have bright highlights, there may be little or no effect. Adjust the slider so the bright highlights in your image begin to look satisfactory. As with the shadow adjustments, if you are unsure where to stop, or see no effect, then start at an amount of 50%.

Slowly adjust the Tonal Width slider to the right and note the additional areas that are now affected. Again, once you start to see the effect you can then fine tune each the Amount and Tonal Width sliders, using them together to achieve the desired effect.

Once you are happy with the Amount and Tonal Width adjustments you should do some final tweaking of the radius similar to the previous shadows radius adjustment, again ensuring you get the most detail out of the image. 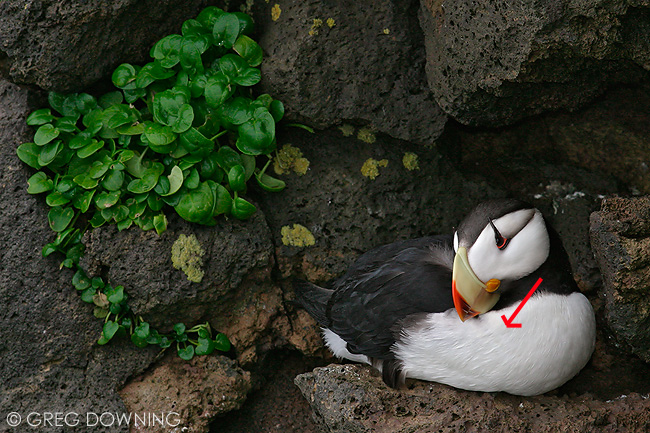 Final, adjusted sample image. The arrow indicates the area most affected by a highligh adjustment.

This adjusts for loss of saturation in the adjusted areas in the image and is a way to add saturation back in these areas without affecting other areas of the image. I generally leave this set to 20% for a mild correction. The effects are generally mild but some color benefit can sometimes be gained by applying it.

Images with little tonal range in the mid-tones and dark areas can benefit from mid-tone contrast adjustment.. This adds contrast to the mid-tones, brings up the dark shadow areas and reduces the washed out look. In most cases, I leave this at zero unless I am lightening an image with severely underexposed areas and need to bring back some contrast to the lightened areas.

The Black and White Clip settings set the amount of information that adjustment may clip from the left and right ends of the histogram respectively. I set both to 0.01 and rarely touch them otherwise, as I generally do any clipping in levels beforehand.

Becoming adept with the Shadow/Highlight tool opens your images to new possibilities, perhaps even bringing some old photos back to life.